making music and loving it 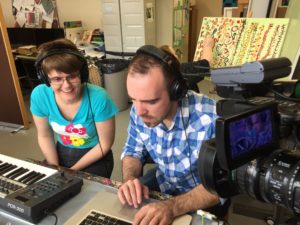 With a lot of help from our friends at ATB, Nina artists are busy writing songs, recording music beds and creating story boards for the next phase of the project – music videos!

The project will produce six original songs written by artists in the Nina collective, along with four music videos.  A number of artists have the chance to get involved, some writing lyrics, some performing, others playing or laying down music beds or starring in the music videos.  Amber Strong, at the keyboard with musician and project music producer, Raphael Freynet, will be playing piano for her own song. 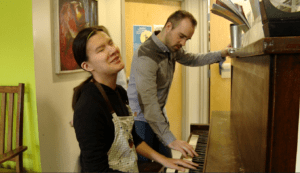 Auditions were held to select who would be performing the songs.  Three singer/songwriters, Angela Trudell, Yvette Prefontaine and Brittany Leitheiser, had the chance to work with vocal coach Joelle Prefontaine (no relation to Yvette). 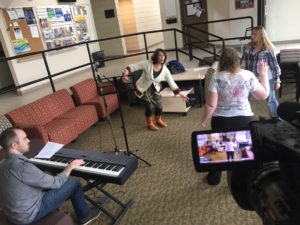 Angela and Brittany working with vocal Joelle and Raphael

Thanks to ATB’s Sandra Huculak, Nina has been able to partner with CKUA on this project.  Angela and Yvette have already had the chance to record vocal tracks in the professional music studios at CKUA! 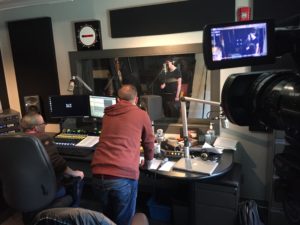 Once all the tracks are laid down, Raphael will be producing the final songs in his studio.  And enter Yvonne DuBourdieu!  She will be working with the artists to create storyboards for the videos she will direct and produce.  Watch for a launch reception later this year or early in 2017. 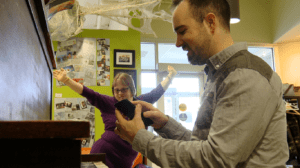 Kelsey Hawkins get into it during her audition