it started with a quilt 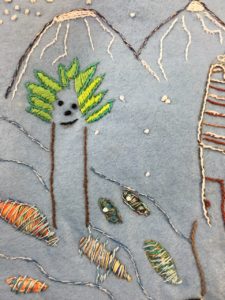 Inspired by the visual impact of driving through the Scottish highlands last year, Leona Clawson began a series of embroidered panels that she planned to use for her latest project, a hand sewn quilt.  Any concrete memories of the trip had already slipped away but the rivers, rocks and landscapes that she had so impressed her in the moment, began to emerge in her artwork.

Leona is an inspired artist who sleeps, eats and breathes art.  She has created highly imaginative works in various media, even creating puppets and performing with them as puppeteer. This year, some of her three dimensional characters were exhibited in the gallery at the Alberta Craft Council. 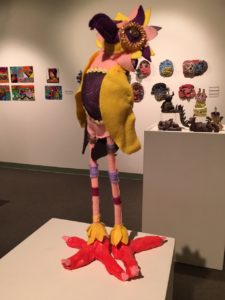 One of Leona’s whimsical figures at Alberta Craft Council

With more than a decade of successful art making and creative exploration Leona was an obvious choice for the 2016 Stantec Artist of the Year award.  This award debuted last year with recipient Scott Berry creating a brilliant installation he named Confusement.  It was a tough act to follow, but Leona rose to the challenge, working with the professional artistic team at the Nina to find a way to bring to life her quilt and the mysterious “Charlie” character that seemed to show up on a regular basis in the embroidered panels. 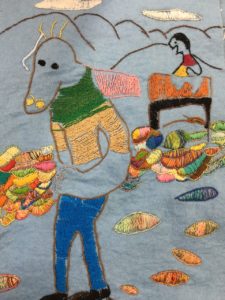 Charlie kept showing up in the work

Leona and her team did a magnificent job of recreating that world.  For the backdrop, Leona recreated her embroideries on gigantic cloth panels using a piece of charcoal on a long stick.  Add to that a forest of trees, life size Charlie, tent, a river of woven fabric, large glass snow flakes and many other fanciful elements and you have Woooooodland. 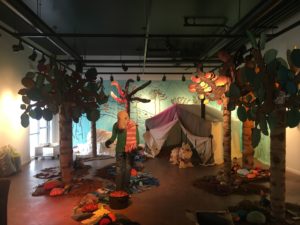 Woooooodland in the Stollery Gallery

This installation opened in February 2016 in celebration of the Nina’s 13th birthday and, thanks to generous support from Stantec, it will be travelling to several other locations.  It has already enjoyed prominent exposure in downtown storefront exhibition space on the NE corner of City Centre Mall and graced the foyer of Stantec’s Edmonton offices.  It travels to Grande Prairie in September and Leona is already packing her bags for an overnight trip to be on hand for the opening reception.  The exhibit makes one last stop at the Rutherford Library on the University of Alberta Campus. 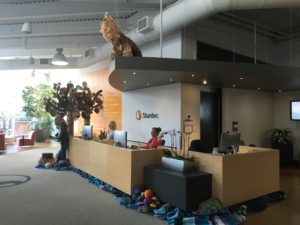 The Nina is grateful to Stantec for their amazing support.  After sponsoring an exhibition in the Stollery Gallery, Stantec wanted to explore ways they could help bring work created by Nina artists to a broader audience.  The brilliant result was creation of this award and travelling exhibition.

Check out last week’s blog for a link to Yvonne DuBourdieu’s beautiful short film that captures highlights from the Scotland trip in March 2015.  The trip and film were generously supported by the Alberta Foundation for the Arts.